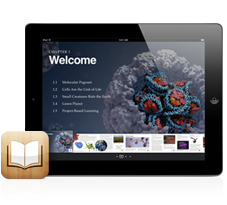 I’ve been on both sides of the textbook market. I’ve read them and I’ve written them. And at each point I have had to struggle to see where they come in the learning experience. And by stuggle I mean it was not obvious that one textbook fit all. They have worked well for students who have time to read them carefully and think about their content. They work far less well when students have to find something quickly. It is rare that textbooks are modular. You need to start at the beginning before you can understand stuff at the middle or end. But sadly, so often, they are dull although that is a two way street. That said, whatever is that textbooks were doing, they were way too heavy and consequently too expensive in how they were doing it.

Apparently, this whole issue vexed Steve Jobs and, part of the iPad strategy, was to find a way to improve the textbook situation. He wasn’t the first. A decade ago, Paul Romer, frustrated by the same set of issues set out to change the textbook industry for higher education. His idea was to use web-based tools and testing alongside more interesting modules to teach economics amongst other things. Romer dropped out of academia and founded Aplia for the purpose. I was actually involved with Aplia at that initial stage and wrote some of its first modules including demand, supply and ‘demand & supply.’ I think they still exist today. The Aplia idea was to substitute for traditional textbooks but that proved not to be and they were more clearly complements. Their graphing tools were excellent — you could just move the supply or demand curve and see what happened to price. Aplia was acquired a few years ago by Cengage.

Today, Apple released its proposed solution. But unlike Aplia their target is K-12 education. The interesting thing about its solution is not the textbooks themselves. What they do is exactly what you would expect. They augment the text in the textbooks and include more interactive elements. Basically, it is Encarta with testing. The interesting part is the economics.

Apple treat textbooks as a multi-sided platform. They need authors to develop content and they need students/schools to buy books (and iPads). For the student-side, they go for the iTunes music model. Textbooks cannot sell for more than $14.99. Basically, the expensive pricing is not an option. That said, iPads aren’t cheap but if we forecast the trajectory here, they will be. Apple could realise an ePad in the future that makes it even more so.

For the author-side, Apple, in typical style, go for ease. They released — for free — a Mac app (iBooks Author) that makes it really easy to write these books and make them look pretty. As an author this gives you much more control. Previously, you would just submit text and publishers would invest a ton of resources making it all pretty. That’s not necessary. In one world, that means authors can go straight to market themselves, something really not available for textbooks before. This is an interesting development.

But there are conditions. If you want to distribute a book for free, you can distribute it however you like. If you want to earn something, then you give Apple a 30% cut (as per usual) and also agree not to distribute the iBooks (interactive version) through anyone else. That seems reasonable too. If you could just post it on the web and sell it that way, Apple doesn’t get the 30%. That said, you can take the content, assemble it in another program and then distribute the book in print or some other version. (At least that was my reading of the iBooks Author 1.0 License conditions). But it is important to realise one thing: if you are going to make a textbook look pretty you need pictures and where are they going to come from? Take it from me, using a picture in a textbook is a big copyright deal and a big pain in the neck. How would a self-publisher organise the permissions? It really takes a big chunk out of the transaction efficiency Apple is providing. The publishers know that this alone will protect them from that competition unless, of course, an easy to access repository becomes available (and it may already be except I don’t know about it).

What Apple is trying to do, of course, is lure publishers onto their platform. For ones with existing books, developing an iBook version will not be very expensive at all. And Apple’s authoring tools are such that they are hoping some of them will so the market will turn in their direction. Apple have secured interest from some big publishers but the question is: will they really invest?

It’s all about getting a virtuous cycle of expectations. People buying books causing authors to develop them. The problem is that the iTunes model was consumer driven. Music publishers came on board because of piracy and because consumers with iPods could move content from CDs onto them anyway. But it was the iPod success that was key. In the textbook case, at least for school children, it is far from clear that the iPad will do the same thing. To be sure, it probably should. Schools have banks of expensive to maintain computers that could probably be economically replaced with an affordable iPad. But unless that actually happens, how will the virtuous cycle really take off?

One silver lining is the price point. At $14.99, education-conscious parents with iPads in the house may be more willing to buy books that work for their children beyond what is merely prescribed in class. That may provide a way by which alternative textbooks could enter without committee-led gate-keepers in the way. That promise may spur authors/publishers to experiment with different forms that may appeal directly to parents.

Actually, on this is a minor digression, I recently discussed with a publisher why electronic textbooks had not really started. After all, we know it is coming, right? The publisher claimed they knew it and they had invested to make sure they could produce them. But they argued that it was the students who didn’t want them — at least for University. I was puzzled but here was the story: students get $$ from parents to buy textbooks. They do so and then sell them back second-hand. They pocket the proceedings and get more $$ from parents next semester. So the high textbook price is a siphon from parents to student’s entertainment money and you can’t do that with cheap electronic versions. This is possible but is it really sustainable. A parent could just purchase the book on Amazon with an auto-buy back or rent it for their children and block the siphon. I would imagine the twice yearly, “this is gonna cost what?” shock would stimulate some search for a better outcome.

As with all digitization movements, these changes make stark what is problematic about the existing state of affairs. What is problematic is partly cost and weight. But it also focusses in on how students use textbooks. Is a cover-to-cover learning model right or should students have self-contained modules like the Kahn Academy provides? I am pretty sure that the answer for higher education is modules. I don’t know what the answer is for K-12 but I suspect that the digitized textbook there is still missing an important ingredient; a teacher standing over a shoulder and making sure learning is getting done.

14 Replies to “Taking the text out of textbooks”