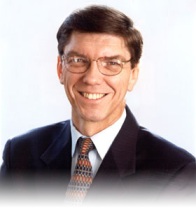 John Gruber points us to a prediction made by Clay Christensen 5 years ago about the iPhone:

That’s why they’ve [Apple] been successful. But just watch the [competitors’] advertisements that you hear for the ability to download music onto your mobile phone. Music on the mobile phone has to be downloaded in an open architecture way from Yahoo! Music or someplace else [other than iTunes]. Which means it’s clunkier, not as good. Mobile phones don’t have as much storage capacity, nor are their interfaces as intuitive [as iPods]. But for some folks, they’re good enough, and the trajectories [of people using their phone as a medium for listening to music] just keep getting better and better.

So music on the mobile phone is going to disrupt the iPod? But Apple’s just about to launch the iPhone.
The iPhone is a sustaining technology relative to Nokia. In other words, Apple is leaping ahead on the sustaining curve [by building a better phone]. But the prediction of the theory would be that Apple won’t succeed with the iPhone. They’ve launched an innovation that the existing players in the industry are heavily motivated to beat: It’s not [truly] disruptive. History speaks pretty loudly on that, that the probability of success is going to be limited.

Clearly, the prediction that the iPhone would fail was wrong. But Gruber’s argument as to why Christensen was wrong is also incorrect. Here is Gruber:

What’s happened over the last five years shows not that Apple disrupted the phone handset industry, but rather that Apple destroyed the handset industry — by disrupting the computer industry. Today, cell phones are apps, not devices. The companies that were the most successful at selling cell phones pre-iPhone are now dead or dying. Amazon, Google, and now even Microsoft are designing and selling their own integrated touchscreen portable tablets. “App” is now a household word.

Let’s not get ahead of ourselves and confuse iPhone with iPad. I am not sure the iPhone replaced too many laptops or computers. Christensen argued that an iPhone was a better phone. Yes, he was lose with the conception of what it was “better” at but, in fact, it was a better portable device than anything there on the market from Blackberry to Nokia to Palm. The point is that when the iPhone was introduced it did not completely destroy the capabilities of existing players. The problem is that the existing players did not have the incentives to invest to provide a much better quality device. Apple had those incentives — being an entrant — as did Google and so what happened was not disruption but competition; something I have written about before. The point is that half of what the iPhone managed to provide was within the capabilities of existing players but they were too wedded to things like a keyboard or a stylus to work out that it was worth pushing to make multi-touch work. Indeed, when they asked their customers whether they wanted to abandon the keyboard they said “no.” It was others who took up the charge; just think about how long Blackberry users would claim the necessity of a keyboard. Indeed, many still do.

A year after releasing the iPhone, Apple did something very significant; it created a platform for mobile software. Again, this was not a new concept it was just that everyone who had attempted this in the past had failed. Apple, Google and now Microsoft finally worked out what mobile apps would need and created the set of conditions for developers to embrace mobile app development and for those apps to reach consumers at the right price. This wasn’t disruption — there were no mobile app sales really to disrupt. Instead, it was new market creation.

This demonstrates several things. First, looking at whether a technology is sustaining or disruptive is not enough to allow you to predict success or failure of companies promoting those technologies. In other words, Christensen’s frame is incomplete. Second, doing things better is still a legitimate path to innovation. You do not have to wipe others out and there is such a thing as just creating new opportunities. So when Gruber says that Apple destroyed the handset industry it is surely laughable. The handset is more important than ever.

One Reply to “Clay Christensen on the iPhone: Wrong about success but right about disruption”