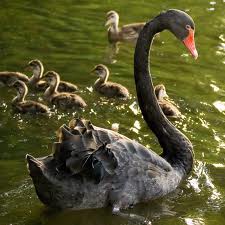 The ever interesting Paul Graham of Y-Cominbator published another essay yesterday entitles, “Black Swan Farming.”  No, it isn’t about a possible Western Australian agricultural opportunity. Instead, it covers this:

The two most important things to understand about startup investing, as a business, are (1) that effectively all the returns are concentrated in a few big winners, and (2) that the best ideas look initially like bad ideas.

The first rule I knew intellectually, but didn’t really grasp till it happened to us. The total value of the companies we’ve funded is around 10 billion, give or take a few. But just two companies, Dropbox and Airbnb, account for about three quarters of it.

The ‘black swan’ part refers to improbable events. (Although from where I come from we call them ‘white swans.’) Graham basically argues that really high return ventures are (a) really improbable and (b) really hard to identify. The essay is a wonderful exposition of that and worth your time.

However, what I wanted to focus upon was the conclusion Graham draws. He argues that this means that venture adjudicators (like himself and VCs) should take far more risks than they do and that the evidence that he is not taking enough risks is the high ‘hit rate’ for funding of Y-Combinator ventures. But, ironically, having spelled out a seemingly compelling logic, Graham then basically says that he doesn’t have it in him to accept that much apparently failure (even though it isn’t failure and he knows it).

Let me step back a moment and try to understand Graham’s issue. A new venture opportunity is presented to him. Some of these are ones that he believes has a high probability of success (‘safe’) while there are others that he believes are doubtful (‘bad’). Now from experience, he knows that the ‘bad’ types are either actually bad or they are ‘non-obvious’ and really good (i.e., a ‘swan’). The really good part comes because less obvious good ideas generally earn more than obvious good ones. What that means is that he is really choosing between ‘safe’ and ‘risky.’

To deal with this, he says that he should — I guess pretty much randomly — always fund a share of risky ventures in his portfolio. So if he is doing things according to this plan, he should have lots of failures in his portfolio. Of course, he doesn’t. Y-Combinator ventures succeed wonderfully (and by the way, Graham deftly is able to say all that but surpress the gloat as he calls that missed opportunity instead).

But there is another theory: Y-Combinator actually ‘does stuff’ that makes ventures more likely to succeed. In that scenario, there is no such thing as a ‘safe’ or ‘risky’ venture. Instead, whatever ‘stuff’ Y-Combinator does identifies or removes the ‘bad’ ideas from the ‘risky’ pool. That is the probability of success is not exogenous but endogenous, in part at least, to the funder.

And there is evidence to suggest that this is the case. Here is a graph from Josh Lerner’s Architecture of Innovation that I wrote about yesterday. 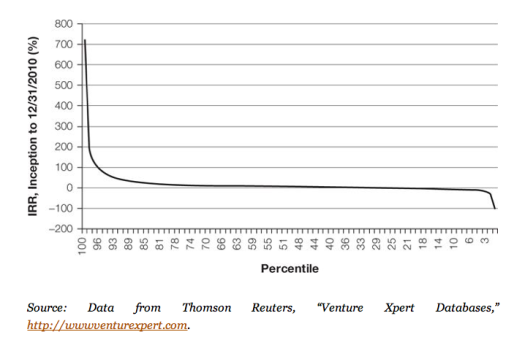 It shows the ranked performance of venture funds. Basically, there are a few that really outperform the rest (these are all pre-2004). Y-Combinator would be in the top performing tail. This suggests that VCs either select well or do something else. In other words, ‘black swans’ don’t just appear but they are potentially identified and made as well. (Isn’t there some fairy tale with the same point?)

Now it is not clear whether this applies to Y-Combinator for sure. Maybe their ‘strategy’ is poor or risk averse. But maybe what they are doing is just right.

One Reply to “Black swans and judging entrepreneurial ventures”