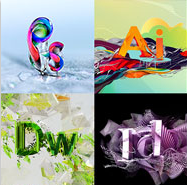 Adobe announced yesterday that it was moving to a subscription model for what appears to be virtually all of its software. A subscription model has existed for about a year now; basically, for $50 per month ($600 per year) you get all of their creative software. For students and teachers, there are discounts. I subscribed as I often use some of these programs and this was cheaper than buying them outright. But what is interesting here is that the subscription model will now be the only game in town.

This has been a long time coming. Software publishers have for years wanted a subscription model. Basically, if you need to have an account in good standing to use software that would make piracy that much harder. In addition, the stream of revenues would be easier to forecast reducing the need for a ‘hard sell’ each time a new version was released. The flip-side of that is that there may be reduced pressure to release upgrades; although publishers still have to keep people subscribing.

The question is: what took so long? One thing that has changed is the cost structure. Software is no longer bought in store and instead it is bought by download. That has made delivery more efficient but, if anything, that is pressure away from going to a subscription model. Instead, the change on the cost side is cloud access and use. Right now, compared to Netflix, the cloud usage costs for software like Adobe (and also Microsoft with Office 365) are not necessarily that high in terms of marginal costs. But keeping the infrastructure going is a bigger issue. That means that you can’t just make software and have no costs. Once you acquire more users, they cost you so you will want to make sure they are using wisely — that is, you want to do something akin to increasing usage charges and a subscription fee can approximate that.

But I think a bigger force for change is underway. For so many years, as we transitioned from physical modes of digital delivery to digital ones, people seemed to have a surprising attraction to ownership. Of course, it was a legal fiction. Music downloaded was licensed and, indeed, the same was always true for software. And consumers were reminded of this every time they accepted terms and conditions but somehow the fact that you never really had to ask permission to use software gave a sense of ownership. I suspect it is a form of repugnance to non-ownership that kept this model going. A decade ago, Microsoft experimented with subscriptions for Office in Australia and failed miserably despite the very high comparative cost of software ‘purchases.’ That suggests a non-economic constraint to me.

Thanks to streaming music and video, the world appears to have changed. The Internet connection is reliable enough that subscription can work without mishaps. Moreover, the strategy of subscribing and then disconnecting from the net while not paying future subscription fees just isn’t feasible or convenient any more. So software publishers (although apparently EA with SimCity was an exception!) have moved away from requiring an Internet connection to use subscribed to software. These factors have released consumers from a bias towards ownership with more confidence that access will continue.

There are dangers here. Could subscription fees escalate as consumers get locked-in? That was always a danger for upgrades but this seems more serious. But there are also opportunities. For instance, I don’t use Adobe each month and if I was a little more sophisticated I would subscribe only when I needed it. And if Adobe were more sophisticated they would offer options for consumers like me; for instance, they could tap network effects by allowing easy and temporary access to transient users precisely when they have to interact with permanent users. They could also offer family deals; at the moment, you can only have subscriptions active on a couple of devices and need to dance around to allow other family members to use it for a project. Microsoft has much better targeting here but then again, they are closer to home in the market than Adobe is.

The one trend away from this has been the mobile app market. If it existed before, it was subscription but not very large. It is now an ownership market and doesn’t show any signs of becoming anything more any time soon. I don’t have an explanation for that except that it is “just different.” But with Adobe and Microsoft moving to subscription, one suspects, this will creep into the mobile space too.