A few years ago I wrote a post that I was quite proud of. It was entitled “Is Paul Krugman Click Worthy?”  Here’s an excerpt:

The New York Times has just proposed to turn us all into Seinfeld‘s Elaine Benes.

In episode 119 of the classic sitcom, Elaine’s preferred method of contraception is revealed to be the sponge. When the sponge goes off the market, she must come to terms with the fact that whatever stock she had in her possession was it. She could buy no more. This meant whenever a, how should I put it, “prospect,” came along, Elaine had to calculate whether to dip into her diminishing stock or not. That is, she had to assess whether a prospect was “sponge-worthy.”

Last year, one of the most famous economists in the world, Avinash Dixit, released a paper, “An Option Value Model from Seinfeld,” based on this episode (you can download it here). Dixit noticed that, in fact, Elaine faced a fairly complex option value problem — that is, if she chose to use a sponge rather than wait she was giving up an option to use it later. Dixit was able to calculate based on some of Elaine’s fictional behavior precisely what that value was.

The New York Times‘ new pay-wall is asking us to make the same calculation. It will require you to register with the Times, which will then track how many times you click on an article (and presumably read it). You will be limited to 20 articles a month. If you want to read a 21st, then you have to subscribe. On a phone that will set you back $15, on an iPad it will cost $20, and if you want it all, it’s $35 for four weeks. So, unless you have already chosen to subscribe, every click you make involves giving up the option for a free click sometime later that month. I don’t know if you will know how many clicks you have already made (which will make life for you harder than Elaine), but you will now be evaluating whether Paul Krugman is “click-worthy.”

To be sure I was proud of the Seinfeld reference but I really was sceptical about the NYT‘s paywall. I thought it was a ‘cognitive tax’ that would drive people to ration their attention on the site. And I wasn’t sure what they would lose from that would be made up from paying subscribers.

Three years later and it appears the NYT’s gamble has paid off. It grew and has maintained subscribers (despite a very confusing set of choices) and others have joined the model. Moreover, the ‘leaks’ in the paywall that come from Twitter and Facebook links have not been its downfall. Indeed, they have probably helped in an Information Wants to be Shared kind of way.

Today, the New Yorker announced it was going in the same direction.

Beginning this week, absolutely everything new that we publish—the work in the print magazine and the work published online only—will be unlocked. All of it, for everyone. Call it a summer-long free-for-all. Non-subscribers will get a chance to explore The New Yorker fully and freely, just as subscribers always have. Then, in the fall, we move to a second phase, implementing an easier-to-use, logical, metered paywall. Subscribers will continue to have access to everything; non-subscribers will be able to read a limited number of pieces—and then it’s up to them to subscribe. You’ve likely seen this system elsewhere—at the Times, for instance—and we will do all we can to make it work seamlessly.

They also said why:

We are also making our work more easily available. When we started newyorker.com, we, like everyone else, faced the dilemma of what to post online. Give it all away or hold things back? That was the question. Our approach was . . . both. We posted some pieces from the print magazine but held most of them back; our subscribers could, with a little effort, unlock those blue padlocks and read it all.

It’s fair to say that this split-the-difference approach was not ideal.

And there you have. A clear articulation of the economics of price discrimination — on in particular, versioning. So much so that it is worth being a little analytical about it because there are lessons for all of us (including me). 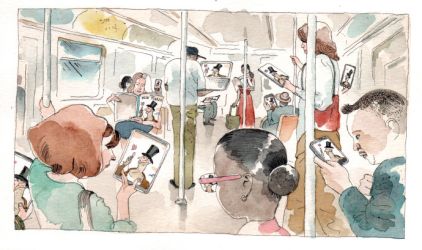 Here is how price discrimination through versioning works. You have a ‘good’ product and you have a ‘bad’ product. You want your consumers to pay more for the ‘good’ product and less for the ‘bad’ product. This is the famous business class/economy class distinction on airlines. But there is more to it than that. As Hal Varian shows nicely, to achieve this you want to invest in making the ‘good’ product the optimal quality and then make the ‘bad’ product sub-optimal quality (in the sense of worse than you would do if it were your only product). Why? Because your good product is facing competition from your bad product whereas your bad product is competing with ‘the market.’ Crimping the bad product is something you can get away with if you have some market power, whereas for the good product, competition keeps you honest. So the consumers of the bad product suffer to ensure the consumers of the good product fork out the big bucks.

So far so good but when it comes to media platforms, who is the customer? When I wrote my piece, I assumed that the main customer of the NYT were advertisers. My image was a world in which most consumers picked and chose their content from many web-sites so it was hard for any one to get money out of them. Instead, advertisers would pay a premium to be associated with consumers who happened to spend more time on the NYT and that the NYT could find out more about. That theory is right and, moreover, implies that driving people away by counting clicks is a bad idea.

But, as it turned out, the customer for the NYT (and likely for many other outlets like the FT and now the New Yorker) is the reader. In that situation, your ‘good’ product is the subscription and the ‘bad’ product is the metered paywall. But in that world, when the New Yorker, allowed some content to be free but all content to be available by subscription, it was making its ‘good’ product worse. If you were a New Yorker subscriber you had to sign in on every new device which has got to be frustrating; after all, your paying for a subscription.

The attitude should instead be: make the good product as good as you can. Once you have that thought, you don’t want a leaky paywall. What you want is a situation that minimises the times your subscribers have to sign in. It turns out that a metered paywall means that they likely have to sign in on their main device but otherwise can see content as others can. Annoyance is reduced. At that same time, your bad product works well and when those consumers hit a paywall they are asked to pay (just like an in-app purchase that operates on the same principle). If the cognitive tax is too high or too annoying, those consumers may leave but they can also pay to stay.

This whole episode illustrates an important issue for would be ‘versioners’: make sure you work out what your good product is and make sure it is good. Sometimes, it isn’t obvious from the outset.

So on that same score I suspect I should temper my concerns about Andrew Sullivan’s approach. And one wonders if media sites like Hulu and Netflix are themselves doing the right thing and have targeted the right good product. We will see.

3 Replies to “One paywall model to rule them all”