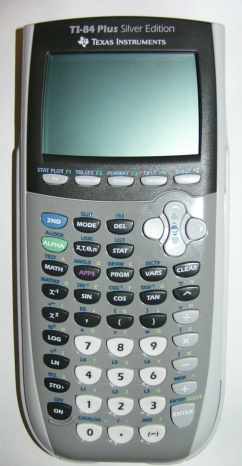 Last year one of my kids needed a graphing calculator for school. We went to Staples and it seemed that the recommended one was a $130 TI-84 graphing calculator. I was outraged. Why would we need this? There was nothing this calculator did that you could not do for free on the web or through Wolfram Alpha. My teenager, with surprising patience, explained to me that (a) they weren’t allowed to be on the Internet during class and (b) even if they could be, they couldn’t be on it during exams and they needed a calculator they were familiar with there. And when you are thinking about SATs or ACTs, that isn’t changing any time soon.

My outrage was not abated as I parted with $150 for a version with with a rechargable battery. I knew that the calculator was complicated — I had no idea how it worked — and I knew that no kid today would actually use that calculator in the workplace as much better apps would exist and be available then. But for some reason, there we were investing both physical and human capital in an obsolete technology.

An article in the Washington Post explained just how obsolete.

Texas Instruments released the graphing calculator in 2004, and continues to sell it today. The base model still has 480 kilobytes of ROM and 24 kilobytes of RAM. Its black-and-white screen remains 96×64 pixels. For 10 years its MSRP has been $150, but depending on the retailer, today it generally sells for between $90 and $120. The only changes have come in software updates.

Moreover, it is almost expensive as getting an iPod Touch with a dedicated calculator app. But TI holds 93% of this market with the remainder going to Casio with some lower priced models that would be just fine but for the fact that teachers are used to the Texas Instruments one.

What TI has achieved is a holy grail in technology: a dominant design over which they full control. There is an entire ecosystem that hinges on that design and the switching costs are insurmountable.

The closest analogy to this is, of course, textbooks. Textbooks tend to be similarly priced because (a) they are tied to the design of classes and (b) they are durable (and so there is a healthy second hand market). But unlike the graphing calculator, these are local monopolies. Adding them all up, however, and you have the same result.

But the textbook is more vulnerable to cheaper alternatives. It is very rare that students need a particular textbook — especially at the University level but probably at High School as well. But that breaks when assessment is tied to a particular book. Then students have no options and the monopoly is entrenched.

Texas Instruments power here is similarly tied to assessment. Absent the need for assessment that restricts access to the outside world, then students could use any tool at their disposal to analyse mathematical problems. But because they are forced into a mode of assessment divorced from that world, they are forced to learn an obsolete system and waste dollars doing so. So I’m going to maintain the rage even if I can’t work out a way to stop Texas Instruments.

16 Replies to “Why is the TI-84 calculator unstoppable?”