A couple of things have happened this week regarding the use of voice as a form of communication. First of all, Apple’s new iOS8 allows users to send others short voice messages instead of text messages. Second, today, Ray Ozzie (whom Bill Gates called “one of the five best programmers in the universe”) released a new app, Talko that is intended to bring voice back to communication. Steve Levy has a terrific write-up that explains it. Given all this, I thought I would reflect a little on voice versus other modes of communication and speculate on how this is going to play out.

The Ozzie led Talko spiel is that the phone call hasn’t really changed as a mode of communication since Alexander Graham Bell invented it a century and a half ago. That may be kind of right technologically but it isn’t really correct though. What Bell invented was the ability to have voice communication over distance. In that it was competing in the “communicating over a distance” market against regular mail, telegraph and, of course, ‘travel and then meet.’ But since that time, there have been a couple of key innovations that have impacted on telephony. One is the ability to have group calls and to bring together groups of people over distance. The other is the ability to leave messages, first, with an answering machine and then with voice mail. The latter changed the equation somewhat, allowing people to let a call go and refuse a simultaneous conversation but also to leave a message and avoid a conversation. On the latter, Seinfeld had a famous bit “have you ever called someone to leave a message and then they pick up and you don’t know what to do?” My point here is that there has been evolution.

But it is safe to say that having a mobile device has changed the voice versus other means of communication equation. My 13 year old son, like many other teenagers, hates phone calls. (A trend that would destroy the premise of more than a few Brady Bunch episodes). In fact, he considers the phone as an app and not an important one at that: his phone app resides out of the way, in a folder. Instead, his preferred mode of communication is via text (which is usually iMessage but also the usual Facebook or the less usual ‘Yo’). We adults may laugh at the world changing but, truth be told, voice is on the way out for us too. The main reason we can still use it is that we know how to use it, including its social cues and norms so the sunk costs of learning all that have been, well, sunk.

What Talko is trying to do is a very typical thing: “what if we were inventing voice communication from scratch with the technology of today?” Their answer, it appears to be, is to embed voice communication in a message ‘activity stream.’ In other words, to give voice communication a social media type user interface. Here is what that looks like. (Basically, the Apple iMessage stream is the same as that). 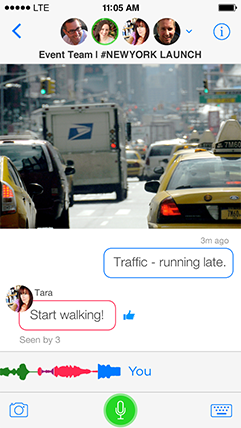 For Talko, the real innovation is how it stores and records all this information. Basically, you can organise into teams and then amongst the team there are conversations. That means that conversations in your team can proceed without you but you can then jump back and still listen to what happened. It also looks like it easy to search for past conversations. I downloaded the app this morning but alas have no ‘friends’ (:() so couldn’t really try any of that out. It strikes me that it isn’t a bad idea but I did wonder whether it was going to provide a better platform compared with, say, Slack that is more developed but doesn’t have a voice component (yet).

Let’s consider then what voice gets you. Talko claims it gets you nuance and emotion that can’t be easily conveyed in text. That’s true but text is not without emotion — even if it is hard to interpret sometimes — while voice is surely not as good as voice plus video on that score. With respect to text, Talko has it both ways: you can text or you can talk in the same conversation. But it is asynchronous. That means it takes away the interplay in a phone call. That said, I see this as the point: all forms of communication have their costs and benefits. Talko is all about giving an individual sender of a message the power to choose their medium. (Although send a voice message and you increase the costs on the receiver of working out the message’s content before devoting time to it).

Now consider the game theory of that little proposition. Institutionally, Talko (and now Apple’s iMessage) gives the sender control over medium. (Actually, Snapchat, Facebook and other social media have done a similar thing with text and pictures while Skype actually offers all three). When power is allocated to one person, then the medium will be chosen with respect to that person’s self-interest. That’s not a bad thing necessarily but there is an externality placed on the receiver (or receivers). I know this when my kids text me and it takes some rounds to work out what would surely be more efficiently communicated to me through voice. But as with any cooperative endeavour (and communication is one such endeavour), while one party may have control over a choice of medium, their desire to be efficient in communication will force them to internalise (in part) the externalities on the receiver; including the receiver’s time. Thus, while power is allocated to one party, one suspects that some efficiencies will evolve.

Actually, Talko helps out on this too. The app can detect whether a person is on the move and also report their location (with permission). That means that it can use that information to predict whether someone can be contacted and whether the sender should expect a quick response or not. That sounds hard to do but it is a way that Talko is using its ‘mobile first’ technology to try and add value. That alone may make it really useful for my intra-family communications challenge.

More interesting is what Talko is doing with regard to ‘conversational memory.’ All conversations are stored by default. That doesn’t happen (to our explicit knowledge!) with traditional telephony. But this is the internet age, and communication being stored is hardly new. (Actually, storage forever only appears to arise in the paid model, otherwise the conversations will be deleted). What is new is that Talko gives individuals the power to destory that memory and to do so selectively. Near as I can tell, if you are a part of a conversation, you have a veto over whether the conversation is kept in memory. So everyone must be ‘happy’ for the memory to last. That said, I wonder what happens when a conversation is deleted and everyone else knows who did the deleting. As with all things, you can give one person the power to do something but that is not the same thing as giving them complete control.

Anyhow, this is all speculation. Talko is a new communication tool. They don’t come along everyday. And as usual, no amount of armchair theorising can substitute for experience on that front. This will be interesting to watch.