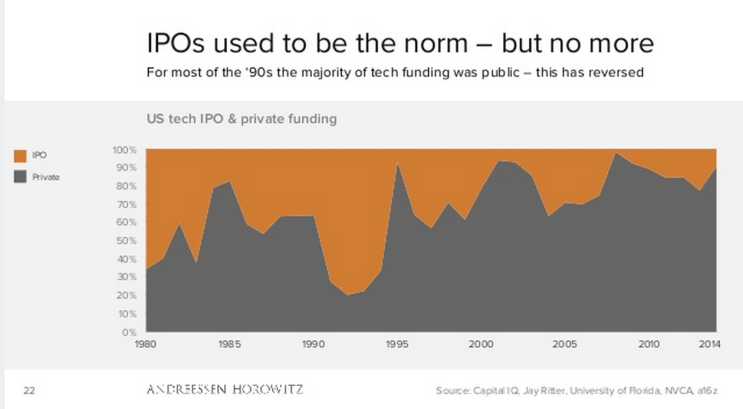 Yesterday, the folks at Andreessen-Horowitz released a slide deck on their reasoning why “this time it is different” on tech funding and bubbles. It is worth a little of your time but here are the take aways:

This is a thought provoking issue. Partly, because the aggregate numbers seem to contradict the “word on the street” that funding for start-ups has never been easier and the valuation methodologies for companies are no better than before. Indeed, for seed rounds, it seems to me that investors have given up on valuation and invest because they like what they see. That said, in an arena dominated by Knightian uncertainty (that is, we have no way to work out what is going on), dropping the pretence of knowledge is a refreshing transparency.

So what to make of all this? I have a potted theory of what is going on (and it is not only potted but I don’t have real empirical evidence for it either). The theory is this:

My point is that if you want to understand tech investing today, sure, you could look at economics and finance as Andreessen-Horowitz are doing but my feeling (and it is a feeling) is that it misses a critical social context. Add that into the mix and we may be able to obtain a better understanding of precisely what is going on and whether, in fact, it is different this time.