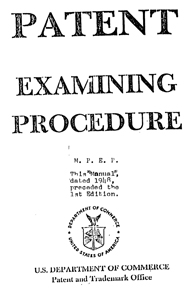 At the NBER Summer Institute there was an interesting panel session on patent reform. One of the issues was the speed and cost of the patent examination process. The usual intuition is that we want this to be as speedy and thorough as possible but that is a goal that is unlikely given budget constraints. In the discussion, the thought came forward that perhaps we were thinking about this wrong. Perhaps it would be better for the patent office to emphasise speed and actually sacrifice thoroughness.

The idea put forward was this: Suppose that patents were granted automatically without examination — beyond some minimal review — but consequently, with less exclusionary power should the patent be at issue in legal proceedings.

How would this work? An inventor submits a patent application and, if they choose, they can receive a ‘weak’ patent immediately. Should they notice someone else commercialising their invention, they could then initiate court proceedings at which time they would need to have the patent examined which could, of course, require all of the changes and uncertainty that comes with that process. Of course, it may be that this is an obvious outcome and could actually be avoided in return for some settlement with the potential infringer of their patent.

The potential advantage of this system is that for the many, many patents that are inconsequential — either no one infringes or no one cares to defend the patent — examination costs are avoided. This frees up resources for other patents to be examined, hopefully more speedily and more thoroughly.

However, as usual the devil will come in the details and, of course, what the details would be is an open issue. For instance, suppose a start-up gets one of these ‘weak’ patents. Then a larger firm who was competing in the same area may either be concerned or alternatively have an incentive to take actions that slow the start-up down. A strategic firm may release an infringing product just to force the start-up into a patent examination process. As I write that, however, that seems like a remote possibility.

More importantly, a concerned firm may be undertaking their own product development and face new uncertainty as to whether they will face an infringement suit or not. Thus, a weak patent may afford a start-up too much power. Thus, there may be too much of an incentive to grab ‘weak’ patents so as to play on the resulting uncertainty with respect to incumbents. In other words, troll like behavior could be encouraged.

All of this is speculative and there is a sense in which the potential problems may turn out to be quite insignificant relative to large efficiencies elsewhere. There are also other instruments that can be played with. For instance, a patent may be regarded as ‘weak’ initially but after, say, 5 years, if it was to be renewed, it would have to undergo full examination.

Alternatively, ‘weak’ patents may be weak in the sense that they can never get to the full power of a normal patent but come associated with a pre-specified compulsory licensing scheme. In other words, patent pools have licensing arrangements that are set and clear. What would happen if inventors could opt to have their patents included in a ‘global’ licensing pool as a matter of course?