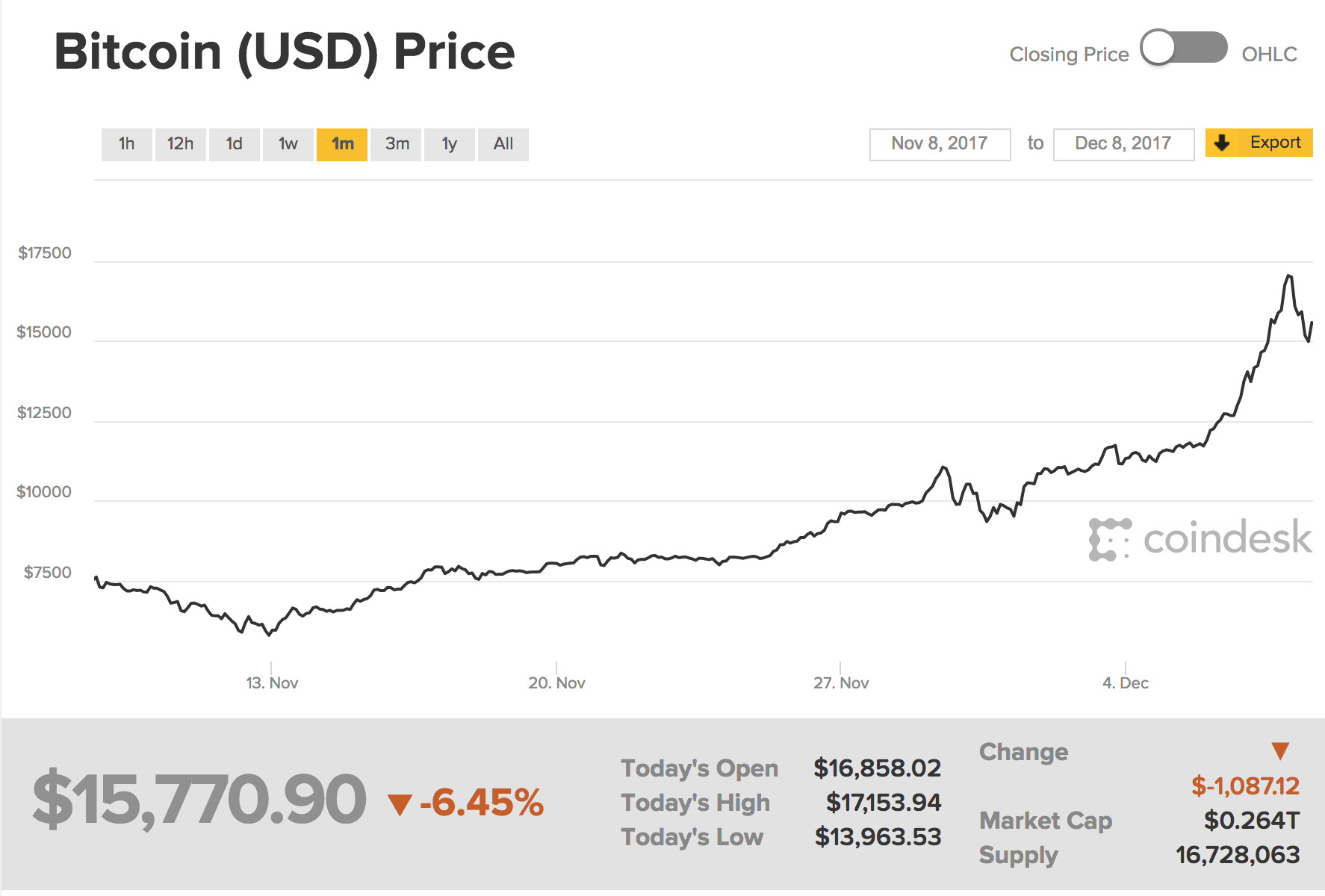 When asked about the current Bitcoin price increase, pretty much all economists agreed it is a bubble. This is not to say that we wouldn’t have minded being given some bitcoin back in 2011 and have forgotten about it until now. But the massive volatility along with the exponential price movements over the past day, week, month, year or what have you, is something we have seen all too often before. Every decade or so, there is a bubble in something. For 2017, it is bitcoin.

Given this, I thought I’d get ahead of the game and write up a post mortem. It isn’t too easy — or perhaps even impossible — to short bitcoin. But what I can do is jump the gun on why this time it was or was not different.

Let’s actually focus, first, on what is different.

Digital-first (only): Bitcoin is the first purely digital bubble. To be sure, we have had bubbles that have occurred mostly in a digital realm but even there we could claim that someone, somewhere was getting paper upon which their paper profits were written. This time around there is no paper. It is perhaps the first bubble in three centuries without that medium so it is different.

World-wide: this is one of the most global bubbles ever. Thanks to bitcoin being digital, anyone, anywhere can purchase bitcoin. You don’t need a stock-broker or a stock-account. You probably don’t even need a bank account. Everyone can get in on this. That means that people are likely buying bitcoin in communities without previous asset bubble experience; not that experience has ever proved much of a constraint before.

Unrelated to finance: bubbles have happened before that are unrelated to finance but they are usually related to being able to raise funds. No one is raising any money here. Unlike a stock market or junk bond crash, if bitcoin goes down, there are no investments that are curtailed except for the mining operations that underpin the system of course. I doubt central bankers are sweating this one out but then again, there will be distributional effects, it is just hard to know what they are. The point though, is that unless people are transferring vast quantities of savings that would be used for investment, it is not clear that a crash will have large financial consequences. Indeed, it isn’t even a signal of any broader issue.

Trading volumes are not that high: In the last 24 hours, around US$43 billion was traded. That’s alot and is about 16% of all bitcoin on issue. But it is perhaps the equivalent of the NYSE normal trading day.

Bitcoin holdings are more transparent: for things such as stocks, the largest shareholders are often known. But for bitcoin, every wallet is available and you can see the holdings and trading activity of each. If you look at the top 100, there is not much trade taking place right now.

Transaction costs (in one dimension) are low: to buy a stock you need a minimum purchase usually ranging above $100. But you don’t need to fork out $15,000 or whatever to buy a bitcoin. You can buy it fractionally all the way down to a satoshi (or 0.00000001 bitcoin). That means you can get into this game with fractions of a penny. I just spent $2.00 on Coinbase to buy some 0.00004905 BTC but I could have done better had I shopped around. Whatever I just did helped set the marginal price of bitcoin. (By the way, Coinbase and others are likely to be doing very nicely in the short-term).

Transaction costs (in another dimension) are high: bitcoin transactions are slow. To be sure, my little flutter was very quick because Coinbase appeared to give me bitcoins from their own holdings — that is what I imagine was going on. But for them to work this all out, they need to then go to the network to have any changes processed. They need to purchase some bitcoin and this will take about 10 minutes to process. Interestingly, that 10 minute time has held up relatively well over the past week. That said, where this has shown up is in bitcoin transaction fees. This is the amount that people bid to have their transactions processed more quickly. Usually, it is nothing as there is lots of capacity for such processing. But in the past day it shot up to US$15 per block.

All this stuff is different but not in the good way. Everything here points to conditions that we would expect to create more bubbles not less. The fact that it is unrelated to finance likely means that the sophistication of the investors is much lower. The fact that trading volumes are not that high mean that this is not of significance to policy-makers for ugent oversight. The fact that transaction costs to get into the market are low means that people will try it out and set the marginal price in the process. The fact that trading time may be slow is perhaps the only potential saving grace here but that is far from certain. However, bitcoin exchanges who are holding bitcoin for even short periods of time may be vulnerable.

How is this the same as other bubbles? The usual hubris is there and, moreover, there is nothing more to it. The only reason to buy bitcoin today and hold on to it is to make more money tomorrow. Bitcoin does nothing else. It does not create future value. It is a pure currency. It can’t even be used to pay your tax bill. In other words, it is as pure a speculation you can get out of a casino but even there at least you can calculate the odds.

Interestingly, how the crash will come is a little mysterious? Bitcoin seems to have no fundamentals other than the system itself. In other words, what can hit bitcoin is risk the whole apparatus might come down perhaps from an attack or some other failure. It may also be dogged by difficulties faced by exchanges who have their own security issues. But there will be no economic indicators of any of this and so the usual story of what triggers a crash isn’t going to be there.

That said, the transparency of the accounts makes this all interesting. The Winklevoss twins used $11 million of their Facebook settlement in 2013 to buy bitcoin and seem to have one of the largest wallets at the moment. These are the billionares and they have the most to gain by being able to exit bitcoin at some point. When they start trading, however, people will know. My University of Toronto colleagues, Katya Malinova and Andreas Park were on top of this issue and have examined the issues associated with such transparency. It is far from clear the Winklevoss twins are in a good position.

My guess is that one of these large wallets will start to divest and that is what will trigger the crash. That will be an interesting day. For those who study financial markets and bubbles, bitcoin is going to create a treasure trove of data.

A final word on the one real consequence from all of this — bitcoin mining. This is the resource intensive process that underpins bitcoin. Moreover, the higher is the bitcoin price, the more incentive people have to buy energy and convert it to bitcoin. At the moment, there are some measures of that power usage that seem extraordinary. I am not yet confident in any numbers I have seen as there are many assumptions building on assumptions. But it isn’t trivial. The good news is that when the crash comes, it will free up energy for use elsewhere and there will be a ton of cheap GPUs around for people to do more machine learning on.

In the time I have written this piece, my $2.00 bitcoin investment appreciated 5 percent. That is a very high rate of return. The only problem: when I turned to my Coinbase app to sell it, I was told that this feature was not yet available in Canada! Suffice it to say, when the crash comes, this is going to be interesting.