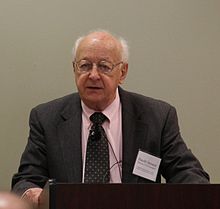 I learned this morning that Harold Demsetz passed away last week. He was 88.

Harold was an enormously influential figure in industrial organization, the economics of organization, and law and economics. He grew up in Chicago. As a kid one of his part time jobs was being a peanut vendor at Wrigley Field (for Bears games, who played there at the time). From there he studied as an undergrad at the University of Illinois, and received a Ph.D. in economics at Northwestern; he might be the most impactful economist to have received a Ph.D. from Northwestern. If not, he is one of a small handful at the top.

Harold was most closely associated with the University of Chicago and UCLA. He spent most of the 1960s at the University of Chicago, where he worked alongside George Stigler. He was then recruited to UCLA in the early 1970s by his friend and colleague Armen Alchian; along with the intellectual environment, southern California offered more and less expensive space for his family. He remained there for the rest of his career.

Harold’s career was punctuated by several papers that are influential to this day; Nobel Prizes have been rewarded for less. His most cited paper, “Production, Information Costs, and Economic Organization,” with Armen Alchian, was published in the American Economic Review in 1972. As I wrote when Armen passed nearly five years ago:

“This paper may be the most influential paper in the economics of organization, catalyzing the development of the field as we know it. It is the most-cited paper published in the AER in the past 40 years. (If one takes away finance and econometrics methods papers, it is the most-cited “economics” paper, period.) It is truly a spectacular piece. It is a theory not only of firms’ boundaries, but also the firm’s hierarchical and financial structure.”

Like all great work, it was the foundation for other huge contributions – work by other great economists such as Bengt Holmstrom, Oliver Hart, Paul Milgrom, and many others can easily be traced to this paper.

Harold’s work in industrial organization was equally influential. His critique of the “Structure-Conduct-Performance” paradigm, which had pervaded industrial organization for at least 20 years by the mid-1970s, has had lasting effects on how economists think about the relationship between market concentration and competition – this relationship reflects effects that work in both directions. Subsequent work by John Sutton and others owe an obvious intellectual debt to Harold’s insight, and antitrust policy treats concentration measures as a proxy for competition much less than it did before Harold’s work. His paper “Why Regulate Utilities?” examined how “competition for the market” could generate competitive outcomes. This work was an antecedent to subsequent work by Williamson (who clarified the role of specific investments in answering the question Harold posed), and by Baumol, Panzar, and Willig (whose analysis of contestable markets was very closely related to Harold’s initial analysis). Harold’s insights regarding the various forms that competition can take (i.e., competition for the market versus competition in the market) are also the foundation of modern analyses of the competitive effects of exclusive contracts, share-based contracts, and other arrangements where firms contract for large chunks of business rather than on a transaction-by-transaction basis.

Finally, Harold’s paper “Toward a Theory of Property Rights” is one of the highest cited papers in the field of law and economics. In this paper, Harold points out that the definition of a property right is not a given – instead, it is an economic outcome. Individuals have incentives to define property rights in a way that serves their interests, and these incentives, combined with competitive forces, lead such rights to be defined in a way that creates efficiencies. In particular, the definition of property rights will tend to create situations where individuals internalize the effects of their actions, and to minimize the extent to which individuals’ actions create externalities. An implication of this is that changes in the economic environment are likely to lead to changes in the definition of property rights; however, it is likely to take time for individuals to figure out exactly how the latter should change.

Echoes of this idea can be heard throughout analyses of the implications of incomplete contracting. For example, in explaining why its merger with Time Warner would create efficiencies through innovation, AT&T discussed this very problem. It explained that new technologies for content development and distribution provided the potential for firms to create new products, but a roadblock in doing so via arm’s-length arrangements in this new environment is that parties have not yet figured out exactly how (intellectual) property rights should be defined in a way that would both facilitate value creation and prevent externalities. It argued that a merger would allow for such internalization, and would create efficiencies relative to an environment where parties have not figured out how to define property rights in a way that would allow such efficiencies to be created by separate firms. This argument traces to Demsetz: the definition of property rights is dynamic and difficult, and the pace of innovation will depend not only on innovative activities that are manifested in the innovation itself, but also innovations in property rights that efficiently structure parties’ incentives.

Harold was extremely prolific, although most of his papers are not nearly as well-known as those I discuss above. One of my favorites among his lesser-known pieces is his review of Oliver Hart’s monograph “Firms, Contracts, and Financial Structure,” which appeared in the Journal of Political Economy in 1998. Harold liked Hart’s work very much, but spent most of his time on a critique. His main point – one which I and others who have applied Hart’s work should keep closely in mind – is that residual rights of control (the rights upon which Hart focuses) are not the only control rights of interest, and might not even be the most important rights to focus on. He reminds us that the allocation of the rights that are not residual – those which are defined within contractual arrangements — is often at least as important. This point is important, and Harold’s discussion of Hart more broadly is worth reading.

I was lucky enough to know Harold well. I met him for the first time in a job market interview at the AEA Meetings in Washington in 1995. There were many people in the room, but after his first question – which was the best question about my job market paper that anyone asked me in any of my interviews – Harold seemed to be the only person in the room. I had never met an economist who approached problems in the way that he did.

Harold strongly encouraged UCLA to hire me, and took me under his wing once I was there. Most of the time, this was in pointing out that I had not thought hard enough about one or more dimensions of a problem, and in suggesting what I should think more about. (“Young man,…”) These discussions were often either in his office – always an open door – or to and from lunch. Walks to and from lunch were long because Harold preferred the more distant cafeteria at the hospital to closer options, because its prices were somewhat lower. These interactions were irreplaceable, not only because Harold was so smart, but also because he approached problems from unique angles. When I left UCLA for Chicago, this is something that I lost, though my interactions with Kevin Murphy and Bob Topel (who were influenced by Harold when they were UCLA students) offset this loss in part.

I am sure that some of you reading this met Harold at some point in your career. Most of you likely did not, and therefore will have to know him through his work. This is well worth doing. Although it was not his style to make his arguments through formal models, his thinking was nevertheless rigorous, insightful, and highly relevant to central problems in industrial organization and business strategy today. Regrettably, what you will not see through his work is that – although he had a reputation of being gruff and critical – he was warm, generous, and witty man.

I will miss him.

3 Replies to “Harold Demsetz. An Appreciation.”