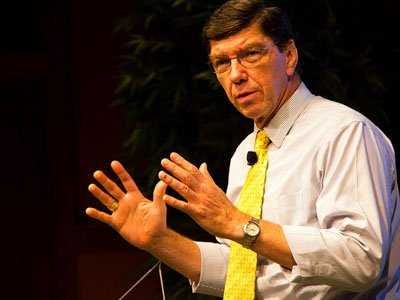 Clay Christensen passed away yesterday at the age of 67. It is hard to think of a management scholar in modern times who has had as broad an impact. There is nary an entrepreneur nor a business person who hasn’t heard of his ideas. The same is true of academics. His is credited, most significantly, with coming up with the term “disruption” to describe the way in which innovation made in-roads into traditional markets. Pre-Christensen you didn’t want your kids to be disruptive. Post-Christensen you wanted nothing more. Christensen himself didn’t fit either mould.

I met Clay Christensen for the first time back in 2015. I had just written a draft of my book, The Disruption Dilemma, when, at the suggestion of a friend, I sent it to Clay. I was unsure about doing this. The book had been born out of frustration. Jill Lepore had written an epic take-down of Christensen’s work which was equal parts her own frustration at the encroachment of his ideas (particularly into journalist newsrooms) and a historical look-back at how accurate his theories had played out. To my own part, I had loved taking the bits I liked from Clay’s work, The Innovator’s Dilemma, when I taught innovation in the classroom. It played well and engaged students. But I was now worried that I hadn’t taken it seriously enough to give students the right perspective. My book was an attempt to set the record straight. Two decades after “disruption” what did we really know. The answer was quite a bit more but not necessarily in support of Christensen’s part of it. Lepore had a point with regard to history but with regard to frustration with the ideas, her blame should have been directed at poor managers looking for an easy out rather than Christensen. That unnecessarily muddied the waters.

My book, however, was critical of Clay’s work. I argued that disruption — the failure of successful firms — was a great field that he pioneered. However, in that field, it was the theory and work of Rebecca Henderson (also at HBS) that stood the test of time. Her recommendations should be followed instead. Given that, I did not know how he would receive it. If I had to go by Lepore’s article — not well. That turned out to be wrong.

I had seen Clay speak once before. It was in awe. I was writing my book and disagreed with most of what he was saying but the way he said it. He was a Master Persuader. His book was one thing but, in reality, apart from the first chapter, The Innovator’s Dilemma reads like a PhD thesis perhaps because that is what it was. But have him speak. And it was compelling. Had I not been in a sceptical mood, I would surely have been converted. But I had to appreciate the gift of it. It wasn’t persuasive in terms of being in your face. It was persuasive in a methodical, slow and sympathetic way. Had he wanted to, he could have become a politician and President. He chose a different path.

In his office, which was small given his large stature, it was a typical academic workspace. He started. “This is a magnificent book you have written here. I love how you moved all this beyond my work to synthesise the ideas of others.” I nodded silently and thought this was going well. “But … Joshua … there is one part I really don’t like …” Here we go. Was it my step by step deconstructing of the disk drive example or the overall take that the whole ‘setting up a skunkworks’ was misguided folly?

“You start the book with the Lepore article. I really didn’t like that article. Its tone was not right. She never showed it to me, a Harvard colleague, prior to publication. Even afterwards, I asked to see her. She didn’t respond. So I went and sat outside her office for four hours. Still no luck. I don’t think it deserves such pride of place in your book.”

To me, it was just a personal choice given how I had come to write in this area. To Clay, it was more. It lifted a colleague who was not treating him collegially, and still hadn’t, to an undeserved place. He was persuasive to me. She should have done more. She should have engaged. Interaction is what academics is supposed to be about.

We had a long discussion. We interacted. He laid down in front of us disk drives of various sizes and we discussed our differences there. We didn’t persuade each other. But when I returned to Toronto I did move the discussion of the Lepore article and presented the book as much as possible in the spirit of congeniality. It was much better for it. After all, these ideas were influential and no one cares about academic or other fights. They want clarity and evidence.

We met a few more times after that. We even tried to work together with the assistance of Horace Dediu but ultimately I couldn’t make his ideas work as a consistent economic theory and so we left it aside. I had always hoped we would find a way but now we are out of time.

Clay was famously a religious person and he did not hide it. It amused me but I also saw a person who was comfortable with his choices. He described telling his first employer that he wouldn’t work on a Sunday and then, when asked to work on a Saturday, how he wouldn’t do that either because he had made a promise to his wife. They wanted him enough that they overlooked his unwillingness to signal personal sacrifice in the workplace. My academic colleagues sometimes gripe that Clay got more credit than was his due. To be sure, many of the theories attributed to him had antecedents elsewhere but he came at them independently and also was far better in translating them into something people might use. So I put those gripes more to academic jealousy.

Clay pursued things according to his own way. He did so calmly and had his own code. He remained an outsider in that community but influential enough outside it that his ideas disrupted thought inside. There is a sense, therefore, that by not playing the game, he proved his own theory.

I am sorry that voice has now left us.