Why aren’t things better? This is something that I often feel these days when searching for information on the internet. And it is especially something I feel when I am searching for products where quality matters. This applies to restaurants, tradespeople, and books, for example. In each of these cases, I am looking for not just anything — but something that is good or even high quality. When I search on Google what I often find is a mess of links to sellers of those products and also lots of review sites. But I can also confine my search to something narrower. I can use Yelp, Zagat, or TripAdvisor for restaurants. I can use Amazon to search for books and read reviews even if I don’t purchase there, although the chances are surely high that I will make a purchase if I find what I want.

Not surprisingly then, the business of matching my search behavior with suppliers and information is a big one. There are people who will pay – usually suppliers themselves – for matches that work out. Google’s entire business model is based on that. People search and reveal their intent, giving advertisers who might satisfy that intent a clear in. All Google has to do is, literally, sit back, ask the advertisers to express just how much they are willing to pay for that connection and then connect accordingly.

There was a time, perhaps five or so years ago, when it was hard to imagine anyone being better at Google in finding stuff. But things have changed. Google is great for finding out the date of the Defenestration of Prague without even knowing what that is, or that there were actually two of them. But if I want a hairdresser who will do a decent job or someone to fix my air-conditioner, I’m never feeling lucky and know I’m in for more work in the form of “click – read – back arrow – click again.”

Many startups have realized this problem and have come into the breach to fix things. They offer specialized search (as distinct from Google and Bing’s universal search) which requires (a) consumers know they exist and (b) that their specialized search can actually give consumers the information they desire more efficiently.

Which brings me back to defenestration which, as Google’s luckiest result will tell you, involves the literal overthrow of rulers over the side of a building. But this isn’t “Game of Thrones.” It’s what search competitors hope to one day do to Google, and what some argue Google is doing to them in its own results in the meantime.

This is precisely what the specialized search companies are accusing Google of doing to them. A case in point is Yelp who, along with academics Tim Wu of Columbia Law School and Michael Luca of Harvard Business School have recently tried to measure what this action of Google has done to search consumers.

What Wu et al. do is consider Google’s search results for something quite specific like “restaurants near me.” This is the sort of thing someone might do from a mobile phone. Here is what I found when I tried it: 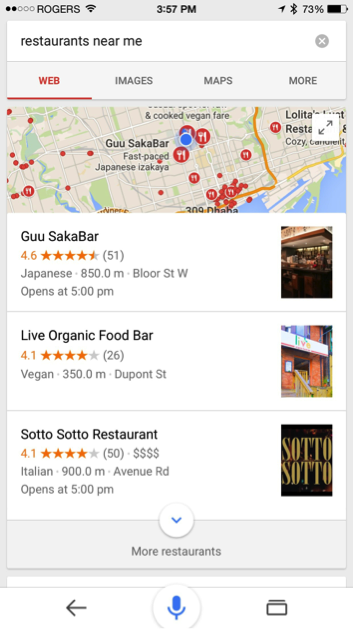 There are several options given but notice that they are ranked by reviews and ratings. What reviews are those? They are reviews that were posted on Google+, Google’s “Facebook killing” social network. What Google has done is taken a leaf from specialized search providers like Yelp and offered consumers search results based on their own specialized search product. In this case, it is Google+ but elsewhere it may be Zagat, which Google purchased in 2011. As I wrote at that time, this acquisition was a recognition by Google that having computers work things out wasn’t enough.

The problem, as Yelp sees it, is Google+ isn’t that good. Indeed, what Wu, Luca, and co. show is that if you replaced those Google+ reviews with reviews from other specialized search engines (including Yelp but there are others), then consumers would click on those results 50% more often. If the goal of Google is to provide people with the best results and if, as is plausible, clicking on them is an indication of that, the researchers have shown that Google is not achieving that goal when it favors its own specialized search product rather than being more neutral.

So what should be done about this? First of all, Google should thank the researchers for providing that information as it offers a guide on how to improve its product. But I suspect Google, famous for its experimentation, already knew that. So that means Google believes that it is better off using Google+ rather than its competitors. That is hardly surprising — but many have argued that Google isn’t quite free in its ability to defenestrate competitors and throw them out of search this way.

The reason is that Google has market power. In the U.S., some 80% of searches are on Google while in Europe and many other places, it is more like 95%. That is a challenge for specialized search engine providers because users of mobile devices, in particular, may not realize what they are being served up. From my screenshot above, it was far from obvious that the ratings were from Google+. The European competition authorities have been examining these practices and some other academics have argued that any favoring by Google of its own verticals should be considered illegal.

So what is the best way forward? Google often says it is providing services in the interests of customers. But this study challenges that, and Google’s defenestrations don’t give us comfort that every review is being given a fair go. Then again, this is the internet and so providers such as Yelp are just some good marketing and press away from being able to get people to bypass Google altogether.

One option is to partner with Google’s competitors. When I do the same “restaurants near me” search on Siri, this is what I got: 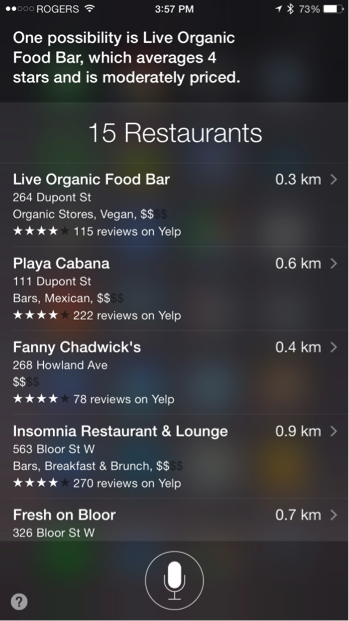 Notice that it is different from Google’s results but also tells me where the reviews are coming from (in this case, Yelp). But Apple isn’t running a neutral search engine and has just partnered with one that it believes best suits its own commercial needs.

Thus, we have a classic difficulty in antitrust law in a dynamic environment. Yes, there is currently a dominant firm that appears to be favoring its own verticals rather than being more open. But they are not a fortress. Even when they get thrown off the page, specialized search products can find some ways of reaching consumers. How this plays out is still uncertain.

Perhaps more importantly, we have to worry about what this type of behavior says about Google’s commitment to organizing the world’s information. It is certainly great to bring a human equation into search. But even if it’s fine from an antitrust perspective, for a brand built on neutrality, are the returns to favoring your own verticals really worth it?

13 Replies to “The Defenestration of Search”