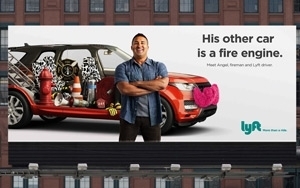 … at least for cars.

Uber is well-known for having pushed autonomous vehicles. And when it first floated the idea, somewhat bemused onlookers wondered how this fit with their short-term goals of attracting drivers. But when Uber set up a major R&D facility in Pittsburgh — gutting Carnegie Mellon’s computer science department — it seemed they were serious.

Along the way, Elon Musk released his updated Master Plan which included the idea of autonomous vehicles being shared through some market. Musk’s vision there was standard sharing economy — people would own their cars and they would rent them out. It wouldn’t be an employment opportunity but it would be an asset sharing opportunity much as AirBnB allows sharing of accommodations.

However, the model changed fundamentally when Lyft got into the game. The other day, Lyft co-founder, John Zimmer released his vision for the future. It was predicated on the autonomous vehicle future and, in particular, how this would reshape cities. He noted, as sharing economy start-ups often do, that the average vehicle is used only 4% of the time and parked the other 96%. This was surely economically efficient. Wouldn’t it be better to up that use ratio dramatically if not to save the cars but reclaim their footprint.

Then came the kicker:

Last January, Lyft announced a partnership with General Motors to launch an on-demand network of autonomous vehicles. If you live in San Francisco or Phoenix, you may have seen these cars on the road, and within five years a fully autonomous fleet of cars will provide the majority of Lyft rides across the country.

Why? For starters, our fleet will provide significantly more consistency and availability than a patchwork of privately owned cars. That kind of program will have a hard time scaling because individual car owners won’t want to rent their cars to strangers. And most importantly, passengers expect clean and well-maintained vehicles, which can be best achieved through Lyft’s fleet operations. Today, our business is dependent on being experts at maximizing utilization and managing peak hours, which allow us to provide the most affordable rides. This core competency translates when we move to an autonomous network. In other words, Lyft will provide a better value and a superior experience to customers.

Call me crazy but that sounds precisely like the views taxi operators had pre-sharing. To hear it from Lyft of all places is somewhat amazing.

What is going on here? It seems that the sharing economy was a transitional state from private ownership to corporate ownership. The point is that if the technology that allows sharing is good enough, the incentive to own a car — even to rent it out — goes down. And it goes down potentially all the way to zero. In other words, what we are seeing now is not considered an equilibrium outcome. There are interesting times ahead.