For a long time, Facebook Messenger seemed to be secondary to Facebook’s core business – a product feature rather than something more. So when Facebook bought WhatsApp for an extraordinary $19 billion, it seemed like WhatsApp would end up being Facebook’s messaging platform of choice. But on April 14, Facebook announced that it was explicitly turning Messenger into a platform that allows media outlets, retailers, and anyone else to develop bots to chat with users, joining Kik, Microsoft, and others offering similar services.

After using Messenger to speak with Rogers, my internet provider in Canada, I believe the new service and others like it could have positive effects on customer service. What it also demonstrates is that small changes can have a potentially large impact, especially when a company like Facebook is behind them.

First, a provider like Rogers could implement Messenger quickly and easily. When I used the service, Facebook had just announced its service the day before. Consider, for a moment, how difficult it usually is to put in place new customer service options. For Messenger to show up as an option, so soon after launch, shows Facebook’s reach inside large organizations; in other words, it’s the secret sauce of enterprise software combined with the ubiquity of mobile devices.

Here’s my interaction with Rogers (with private bits blurred out). 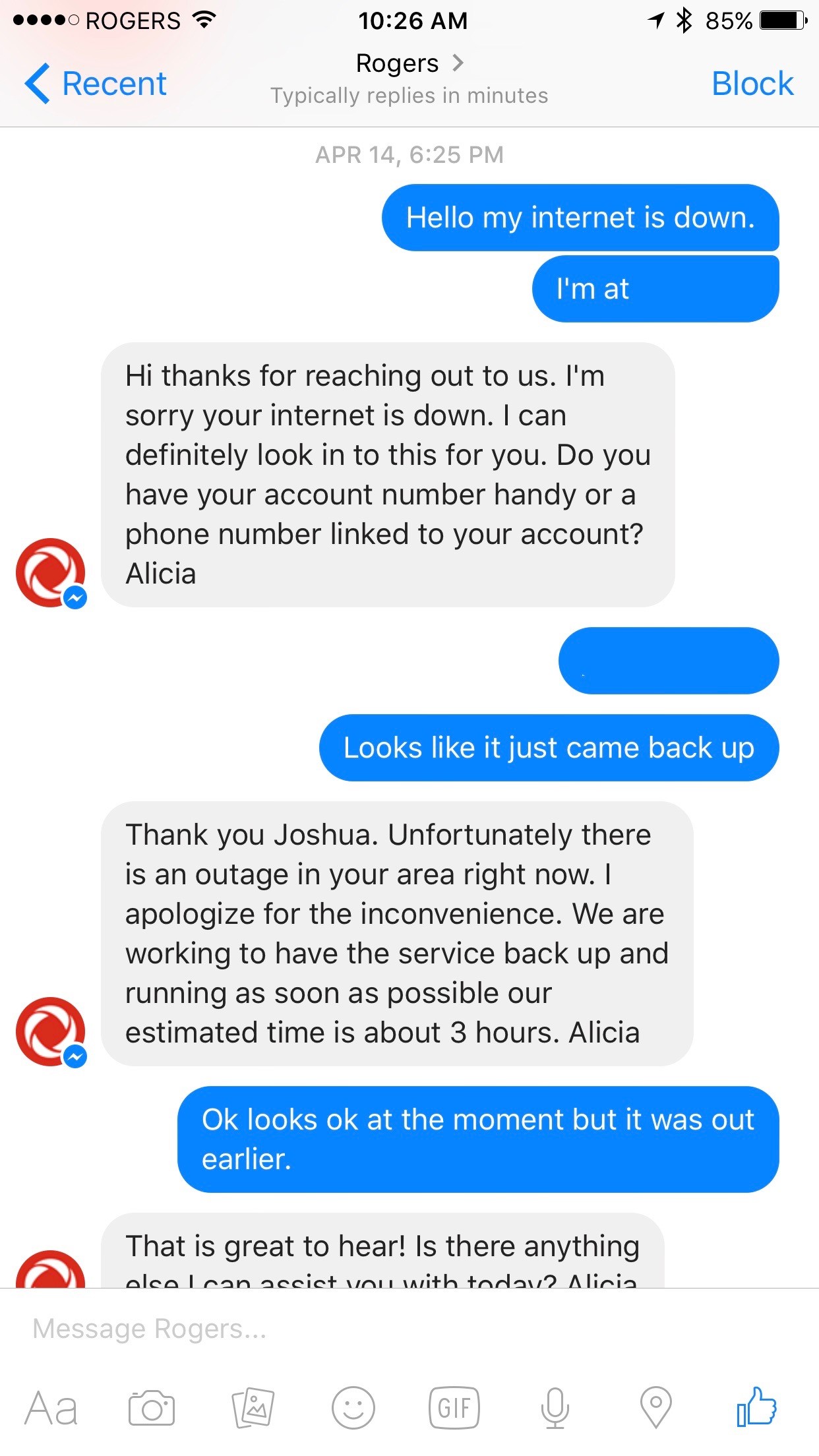 As you see, the interaction was quick and to the point. I didn’t have to sit and wait for a reply because I received notifications. And, after 10 words, the agent had enough information to find out what I needed. This is stunning efficiency. This is the second big feature of Messenger. It works like Messenger. I used as I would any of my friends and that is how the interaction felt. This is a small change but, consider this, if Messenger were everywhere all of my interactions with technical support and customer service – regardless what for – would be familiar. This is a potentially large network effect.

As an aside, because of all the talk about AI, I was curious as to whether Alicia was a person. So I asked. She claimed she was human and the interaction was pleasant. 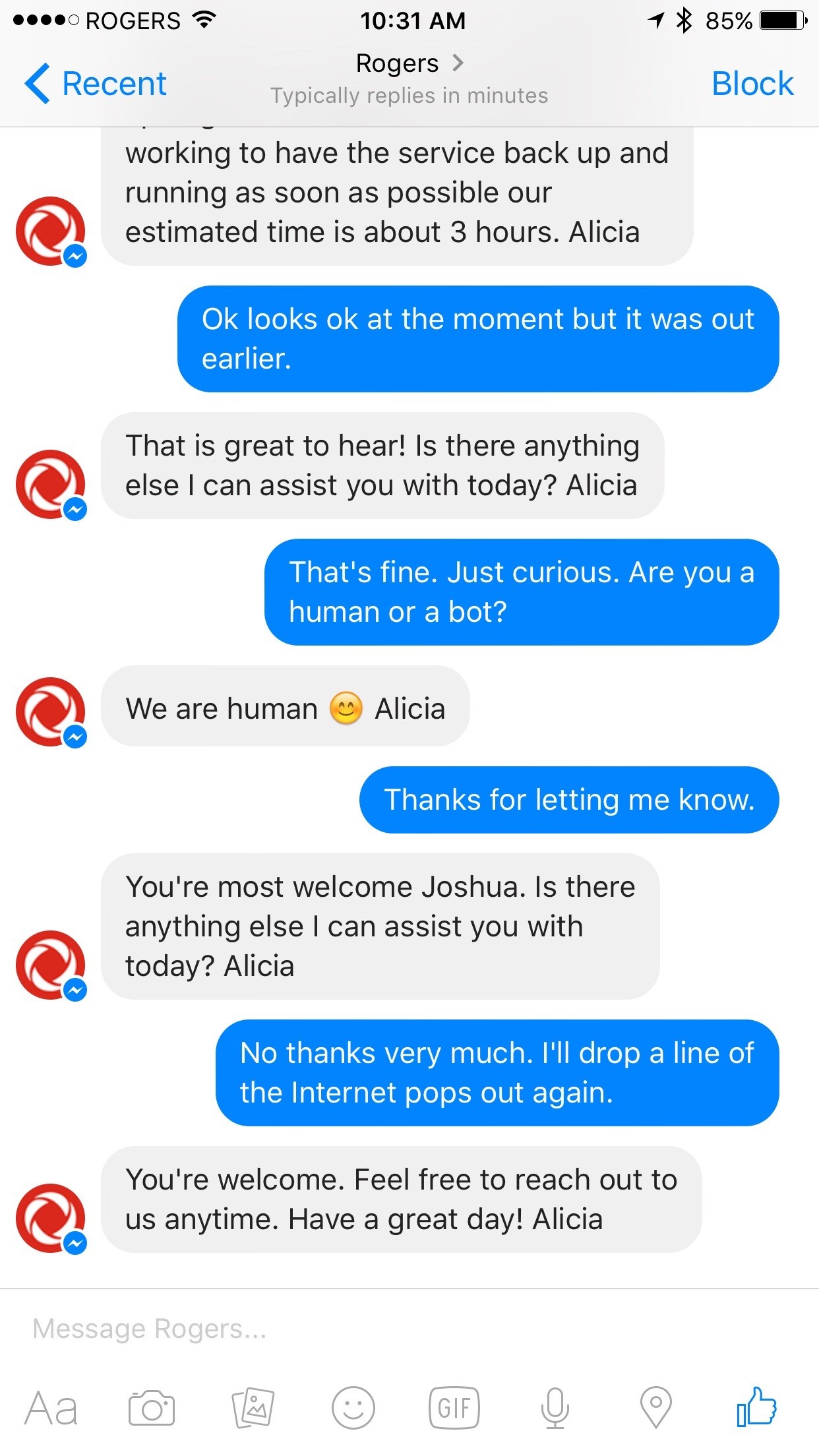 Compared to the tired and unemotional phone-based customer support I’m used to, Alica’s emoji use seemed natural and pleasant. Once again, building customer service right into familiar forms of communication allows us to act with familiarity.

This may not seem out of the ordinary to many of us. I had a simple problem that didn’t require much back and forth. But Messenger’s strengths became clear as my internet issues continued. The next time I wanted to talk to customer support, I just opened the Messenger app and continued the interaction. I didn’t speak with Alicia but the new rep saw my history and so I didn’t have to repeat what I had told Alicia. There was no ticket and no closed ticket. It felt like Rogers was “always” there for me. Once again, by having a small change towards the familiar, I am able to interact with Rogers – a large company – as I would with a person.

My internet issues have to do with some broader issues in my neighborhood. So over the last few days I have interacted with a number of Rogers agents. Each one has been able to answer my questions without a long exchange.

One good customer service experience does not make a revolution. But let’s think about what Facebook has done here.

They have seamlessly rolled out a customer service platform to a large group of customers, who previously needed to use specialized private vendors to handle customer support. It’s true that many companies also have teams that respond to inquiries via Twitter. But in my view Twitter is a shadow of Facebook in terms of user awareness. You can complain to an airline on Twitter about a flight delay but you have to go through a song and dance to see if the person at the other end can help. There’s always a sense that social media teams are just there to comfort us or prevent a public outburst. Twitter is aware of its limitations and is rolling out customer-service tools for enterprises. But I didn’t see a Twitter link on the Rogers homepage (or Kik or Skype).

Second, a messaging app is a very quick and convenient form of communication. You don’t have to sit there while someone works out how to resolve your issue. At one point, I just asked the rep to message me when there was news, and she did. If I were using email, I’d have no way of knowing if my problem was being dealt with. Messenger tells you how long it usually takes for a response (for Rogers it is within minutes, and that has been true in my experience).

Finally, the people using the Messenger service at the moment are users who like to message or at least know how to do so. This is a neat pathway to scale. Rogers can probably handle the load right now since there aren’t a lot of users. But as more people use Messenger, Rogers will have to work out ways to meet the demand. But the fact that those interactions are conveniently and efficiently passed from rep to rep is very important, and it highly likely those interactions are forming the training for artificial intelligence to handle much of this. Or at least the initial interaction.

And all of this is happening for Facebook. Suffice it to say, this has the markings of a larger communications movement as corporations become more and more socialized.